According to the latest data from the Ministry of Commerce, India imported $602 million of solar modules and batteries in the third quarter of 2018, an increase of about 38% compared to $4.3663 billion in the second quarter, despite imports compared to the same period last year. It has dropped by 17%.

Mercom believes that in the past few months, India’s PV installations have been slow due to uncertainties in safeguarding tariffs and exemptions, and the issue of excise tax remains unresolved. Even the import of solar modules from Vietnam and Thailand, which are not on the list of safeguards, requires the issuance of temporary bonds and statements, which also seem to affect trade activities. 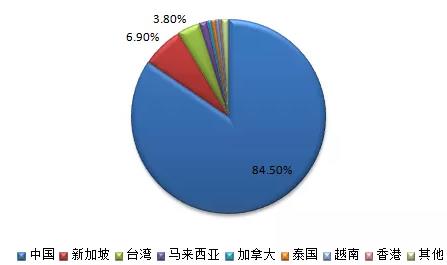 China remains India’s largest supplier of solar modules and batteries. In the third quarter of 2018, solar cells and components imported from Chinese companies accounted for nearly 84.5%, a slight increase from 75.9% in the previous quarter.

The batteries and components from Singapore accounted for 6.9% of India’s total imports of solar cells and components in the third quarter of 2018, totaling $0.413 billion. Singapore has become India’s second largest solar supplier. In the three months from July to September 2018, Singapore’s market share more than doubled.

In the third quarter of 2018, solar modules from Malaysia accounted for 1.3% of India’s total solar imports, Canada and Thailand each accounted for 0.7%, Vietnam with 0.6% and Hong Kong with 0.4%.

In the third quarter of 2018, the United States accounted for 58% of all solar modules and batteries exported by India. This is down from 63% in the previous quarter. Denmark, Australia, Poland, the Netherlands and Belgium are other major countries that purchase solar cells and components made in India.

This site is reprinted from the Polaris solar photovoltaic network. The purpose of the reprint is to transmit more information. It does not mean that this website agrees with its views and is responsible for its authenticity. If you are involved in the content, copyright and other issues, please contact us within 30 days, we will delete the content in the first time!

Protable Solar Generator power supply can not block the cause of lightning current...