LeTID (light decay under high temperature conditions, typically 50-80 ° C) was found and is typically present in the polycrystalline PERC component. With the improvement of laboratory research, under certain conditions, single crystal P-type Cz, FZ and N-type A can be seen similarly on the silicon wafer. The LeTID mechanism is relatively complex. The root cause of LeTID may be: metal impurities such as Cu and Ni in silicon wafers, hydrogen entering silicon wafers from SiNx and AlOx, or a combination of hydrogen and impurities. Related mechanism debate,

Therefore, the outdoor demonstration of the State Key Laboratory of China Electric Apparatus Research Institute in Sanya, Hainan, and Turpan, Xinjiang (2016.10~2017.9) can provide an important reference for the industry (as shown in the above figure, the highest temperature is the monthly maximum temperature. Component backplane, temperature is the component. The average temperature of the component backsheet between 10 and 14 o’clock during the day answers the question of the first year of decay of the single crystal PERC component. Although the previously published results were primarily used to study power generation data, in practice, the component electrical performance parameters were accurately tested before and after sampling the components. The components purchased were from the first-line manufacturer and the initial power supply consistency was very good. 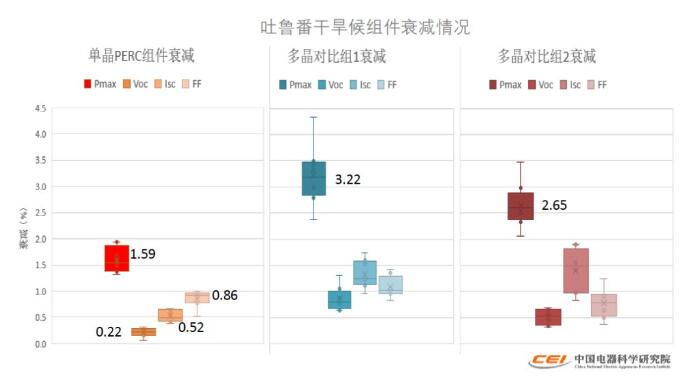 From the empirical results of the two bases, for this harsh outdoor environment, the aging attenuation of the components is much more significant than in the general mild environment, and the single-crystal PERC assembly (from LONGi) has better attenuation, indicating single crystal. PERC technology combined with low light attenuation technology can effectively cope with outdoor high temperature working conditions.